← Vegan Advocacy: On the Verge of a Breakthrough?
Witness to a Goat Killing — A Sad Encounter with Kosher Slaughter →

During a Webinar put on by the group Farm Forward, The Beet-Eating Heeb this month finally got an opportunity to ask author Jonathan Safran Foer the question that he had been dying to put to him.

Well, maybe “dying” is a poor choice of words.

My fellow Jew, BEH asked, do you think it’s morally OK for humans to kill animals for food?

His answer was profoundly disappointing. Disillusioning in the extreme.

Safran Foer said, “The answer doesn’t really matter. Maybe it’s fun, intellectually, to consider the question. But let’s talk about what’s actually in front of us. The question is the least relevant to the choices we make on a daily basis.”

This, from the sensitive soul and gifted writer who wrote “Eating Animals,” the book that has probably created more vegans than any other written work in history?

The veg advocacy movement can ill afford to engage in internecine warfare, outnumbered as we are by the forces that are promoting meat eating. So The Beet-Eating Heeb will try to engage in some self-restraint (wish him luck) as he critiques Safran Foer’s answer.

To state the obvious, the issue is of ultimate consequence and of grave concern to farm animals, who literally moan, bleat and otherwise beg for their lives. It’s one thing for their desperate but futile pleas to fall on deaf ears within the blood-soaked slaughterhouse. It’s quite another for these innocent animals to find a heart of stone inside the likes of Jonathan Safran Foer.

However, while his answer certainly seems surprising, even bizarre, it’s actually exactly what you would expect – when you consider the morally hypocritical corner that JSF has painted himself into.

Much to the chagrin of his legions of vegan fans, Safran Foer has firmly hitched himself to the “humane” farming movement. This movement, of which Farm Forward is a part, maintains that it’s OK to slaughter animals, as long as you raise them in a humane fashion. It’s a response to factory farming. 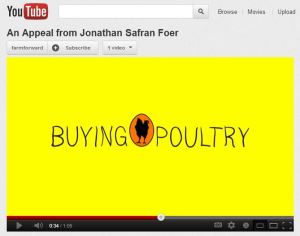 Click on the photo to see JSF selling chicken.

Safran Foer discussed this movement in “Eating Animals” with a glowing profile of Niman Ranch. Since the release of the book, he has become a spokesman for Farm Forward, even doing a YouTube video that endorses consuming poultry.

The problem with Safran Foer, Farm Forward and the rest of the “humane” farming movement is the contradiction inherent in their position.

Please explain to The Beet-Eating Heeb how you can care about an animal’s welfare for a few years, then turn around on a day of your choosing and stick a knife into the innocent creature’s throat.

The Beet-Eating Heeb, as all Jews should, finds this Jekyll-and-Hyde type of morality to be troubling, even scary. BEH favors a transcendent, consistent morality.

This whole “humane” farming movement reminds The Beet-Eating Heeb of the parable of the woman who rescued an injured rattlesnake and nursed it back to full health. For the next few months, the snake would curl up in the woman’s lap as she watched TV at night, just like a pet cat.

Then one night, out of the blue, the rattlesnake lifted its head and plunged its venomous fangs right into the woman’s neck.

“My God, how could you do that to me, after we spent all these nights together?,” the woman gasped as she died.

“Hey lady,” the rattler answered, “you knew I was a snake.”

Jonathan Safran Foer has aligned himself with the snake, metaphorically speaking.

Given all this, his answer to BEH’s question isn’t surprising, after all.

He has put himself in a position where he can’t say killing animals for food is wrong. But nor, given his obvious concern for animals, can he say it’s OK.

Characterizing the question as irrelevant was just a way of dodging it. Given the morally untenable position he has staked out, he didn’t have any good options when confronted with BEH’s query. Dismissing the question as frivolous, as he did, might very well have been the least bad option for him.

Of course, Safran Foer is entitled to believe and espouse whatever he wants. But BEH, as a big fan of his book “Eating Animals, would ask him to reconsider his ties to the “humane” farming movement and give animals the moral consideration they deserve – every day and always.

I'm a meat-abstaining Jew who believes our religion commands us to treat our bodies with care, to treat animals with compassion, and to treat our planet like it's the only one we've got.
View all posts by The Beet-Eating Heeb »

← Vegan Advocacy: On the Verge of a Breakthrough?
Witness to a Goat Killing — A Sad Encounter with Kosher Slaughter →