Witness to a Goat Killing — A Sad Encounter with Kosher Slaughter

It takes a lot to make The Beet-Eating Heeb cry.

He can chop onions and watch Brian’s Song, simultaneously, with dry eyes.

But he shed a tear last week at the Hazon Food Conference.

What caused this stoic beet-eater to show some emotion – at a conference, of all places?

The killing of a goat. 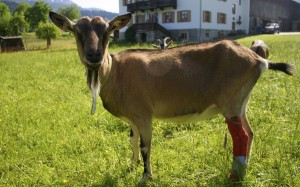 Hazon did not permit photography at the schechting. But this is about what the goat looked like, just before he was killed.

On a cold, dreary morning, Hazon presented a demonstration of the schechting (kosher slaughter) of a young goat in front of about 30 conference attendees, including The Beet-Eating Heeb.

It is true that the goat was raised humanely and that he suffered for only a few seconds.

But BEH still found the slaughter of this beautiful, golden-furred animal to be troubling. Deeply troubling. On many levels.

It was particularly disconcerting to see Jews killing an innocent, gentle, affable animal – in a completely Jewish context, no less.

Judaism is about celebrating life, not about causing unnecessary death. At least as The Beet-Eating Heeb understands his religion.

But here were Jews, taking a goat in the prime of his life and slitting his throat. Panicked and anguished, the goat immediately lurched forward and dropped to his knees as blood gushed from his neck. The shochet’s assistants then threw a tarp over the goat – and a tear streaked down The Beet-Eating Heeb’s cheek.

The goat’s corpse was then strung up in a shed, skinned and disemboweled.

Savage. How else could you describe this entire scene?

And to think this was the gold standard of slaughter. As good as it gets. Try to imagine the scene in an industrial slaughterhouse, where the vast majority of farm animals are killed and dismembered, often by the thousands in a single day.

But, ironically, had BEH witnessed the slaughtering of an animal in that kind of slaughterhouse, it would not have bothered him as much.

To see Jews engaging in an act of unnecessary violence and chilling betrayal . . .

This goat had been raised by young Jewish farmers who had engendered the animal’s trust with their humane care. Then, in an instant, these same Jews turned on the unsuspecting goat and killed him.

If that isn’t an act of supreme betrayal, what is? Is this any way for members of a religious community to act in relationship with one of God’s fellow creatures?

And for what purpose was this animal killed? That’s an easy one: Because some people like the taste of goat meat. Never mind that we live in an era and in a country in which an incredible variety of fruits, vegetables, legumes and grains are available – all you need for optimum health.

Don’t get The Beet-Eating Heeb wrong. He supports Hazon’s decision to conduct a slaughter at the conference, if only because meat-eaters should be confronted with the reality of their dietary choices.

The demonstration helped BEH realize that the whole kosher- meats business is a morally problematic enterprise, to put it mildly.

So what’s the solution?

Should Jews get out of the slaughtering business and eat non-kosher meat?

The only solution is for Jews to abstain from meat altogether, which just happens to be the Torah ideal, anyway.

I'm a meat-abstaining Jew who believes our religion commands us to treat our bodies with care, to treat animals with compassion, and to treat our planet like it's the only one we've got.
View all posts by The Beet-Eating Heeb »