When the Famous Rabbi Met the Frightened Calf

If you have ever heard of the Talmud, chances are the mere mention of the word causes your eyes to glaze over.

Most people think of it as a vast compendium of hair-splitting arguments about arcane issues in Jewish law. And they would be mostly right.

However, amid all the details and debates are some amazing stories with messages and morals that remain highly relevant.

The Beet-Eating Heeb is pleased to share such a story with you right now. (If you have a copy of the Talmud at home, you can follow along at Bava Metzia 85a.)

About 2,000 years ago, shortly after the destruction of the Second Temple, there existed a rabbi named Judah HaNasi. He wasn’t just any rabbi. This was the guy who put the Oral Torah into writing, preserving it for posterity, creating what we call the Mishnah.

On top of that, he was a direct descendant of King David, hence the name Judah the Prince. In other words, he was a big deal. A very big deal. 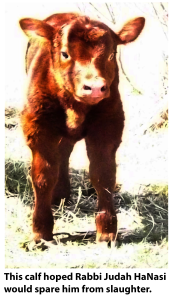 One day, when he was putzing around in his front yard, a bellowing calf, eyes bulging with fear, came running toward him.

The calf hid himself inside the rabbi’s robe, tucking in his tail so that no part of him would be visible.

Rabbi Judah HaNasi, being a pretty smart guy, quickly sized up the situation.

This calf was trying to escape his owner, who was taking the young cow to the shochet, the slaughterer.

So what did the rabbi do?

Rabbi Judah HaNasi, in his sternest voice, lifted up his robe and scolded the calf.

“This is why you were created,” the rabbi said. “Go back to your owner!”

At least that wasn’t what the calf had expected.

The calf, with tears streaming down his face, made his way back to his owner. And met his demise later that day.

However, no sooner had the calf departed from the rabbi’s robe when a funny thing happened to Judah HaNasi. Actually, what happened isn’t that funny.

He immediately developed a painful toothache. Then kidney stones. And splitting headaches.

It seems God and His angels did not approve of the way Judah HaNasi treated that poor calf.

According to the Talmud, “They said in Heaven, ‘Since he has no pity, let us bring suffering upon him.’”

Keep in mind, there was no Vicodin or codeine back then.

Then one day, in Year 13 of The Pains, the rabbi’s housemaid came into his study, where he was struggling to concentrate on his work, as anyone who has suffered chronic pain can understand.

“Excuse me Rabbi,” the housemaid said. “I have found a nest of weasels in the spare bedroom. Should I swat them with my broom?”

The rabbi considered the matter for a moment, cleared his throat, and said:

“Leave them be.  It is written (in Psalms 145:9) that His tender mercies are over all His works.”

And with that, his pain instantly disappeared. The toothache. The headache. The stomachache. All gone. Just like that.

What happened? The Talmud tells us:

Quite a story, eh?

So why do you think this account of Rabbi Judah HaNasi’s misstep and redemption is recorded for posterity?

It’s because we are supposed to see ourselves as Rabbi Judah HaNasi.

Every time we choose what to eat, we face choices similar to the ones that confronted the great rabbi of yesteryear.

We can support cruelty. Or we can bring more chesed, more kindness, into the world.

The choice is yours.

Posted in Torah/Bible and Veganism